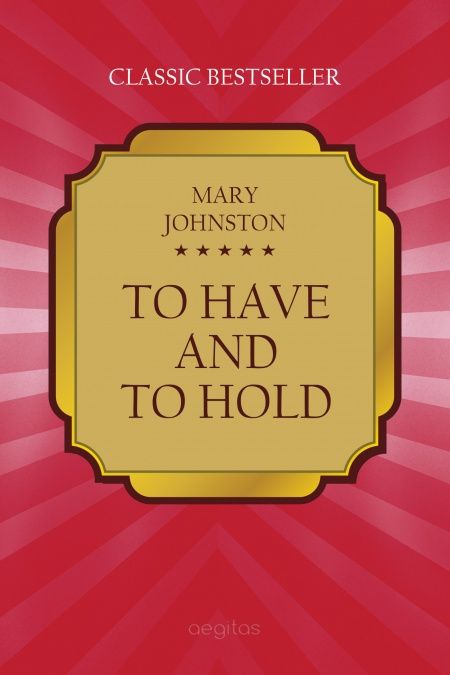 To Have and to Hold

To Have and to Hold (1899) is a novel by American author Mary Johnston. It was the bestselling novel in the United States in the following year (1900). To Have and to Hold is the story of an English soldier, Ralph Percy, turned Virginian explorer in colonial Jamestown. Ralph buys a wife for himself - a girl named Jocelyn Leigh - little knowing that she is the escaping ward of King James I, fleeing a forced marriage to Lord Carnal. Jocelyn hardly loves Ralph - indeed, she seems to abhor him. Carnal, Jocelyn's husband-to-be, eventually comes to Jamestown, unaware that Ralph Percy and Jocelyn Leigh are man and wife. Lord Carnal attempts to kidnap Jocelyn several times and eventually follows Ralph, Jocelyn, and their two companions - Jeremy Sparrow, the Separatist minister, and Diccon, Ralph's servant - as they escape from the King's orders to arrest Ralph and carry Jocelyn back to England. The boat they are in, however, crashes on a desert island, but they are accosted by pirates, who, after a short struggle, agree to take Ralph as their captain, after he pretends to be the pirate Kirby. The pirates gleefully play on with Ralph's masquerade, until he refuses to allow them to rape and pillage those aboard Spanish ships. The play is up when the pirates see an English ship off the coast of Florida. Ralph refuses to fire upon it, knowing it carries the new Virginian governor, Sir Francis Wyatt, but the pirates open fire, and Jeremy Sparrow, before the English ship can be destroyed, purposefully crashes the ship into a reef. The pirates are all killed, but the Englishmen (and woman) are rescued by the Governor's ship.