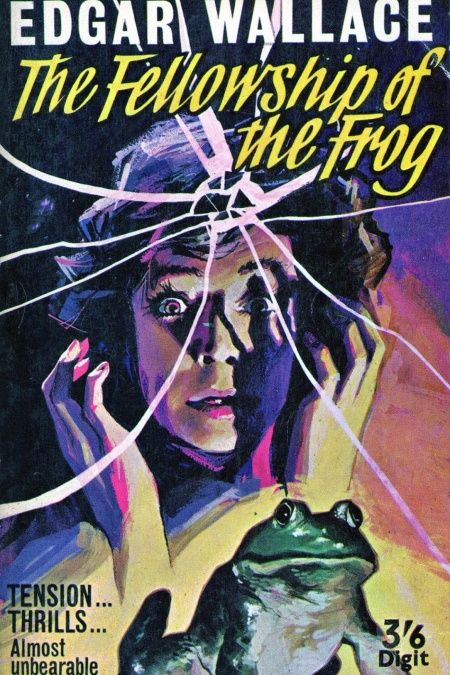 Fellowship of the Frog

The Fellowship of the Frog starts out with the murder of an undercover detective at the hands of the Frog, the mysterious leader of an ever increasing group of tramps. The Fellowship, so called because of the frog tattoos on the members’ hands, has become so expansive that they threaten the international affairs of England. Enter Dick Gordon and Elk, the rozzers on the case of the Frog. Gordon is dashing, Elk doesn’t play by the book. Gordon wants the girl, Elk wants a promotion. In other words, they’re perfect for me. But the questions they have to answer are many: Who is that strange American who keeps turning up at interesting places? Who is the Frog and how can they stop him? Is the Fellowship of the Frog really the coolest name for mystery novel? (Yes. Sweet baby Jesus, yes.) Will Dick Gordon and Miss Bennett be able to live happily ever after? Is Elk’s mangling of important historical dates funny way to round out his character? (Ugh, no.) Will all of these questions be neatly wrapped up in the end? (You better believe it. The Frog is no match for my rules of good mystery writing). Richard Horatio Edgar Wallace (April 1, 1875-February 10, 1932) was a prolific British crime writer, journalist and playwright, who wrote 175 novels, 24 plays, and countless articles in newspapers and journals. Over 160 films have been made of his novels, more than any other author. In the 1920s, one of Wallace's publishers claimed that a quarter of all books read in England were written by him. He is most famous today as the co-creator of King Kong, writing the early screenplay and story for the movie, as well as a short story King Kong (1933) credited to him and Draycott Dell. He was known for the J. G. Reeder detective stories, The Four Just Men, the Ringer, and for creating the Green Archer character during his lifetime.